Jargon is an inescapable part of business writing and office life in general. But there are certain buzzwords you should avoid unless you want to sound like a corporate cliché! Here, then, are seven buzzwords words you might want to avoid for the sake of not driving your colleagues to despair. 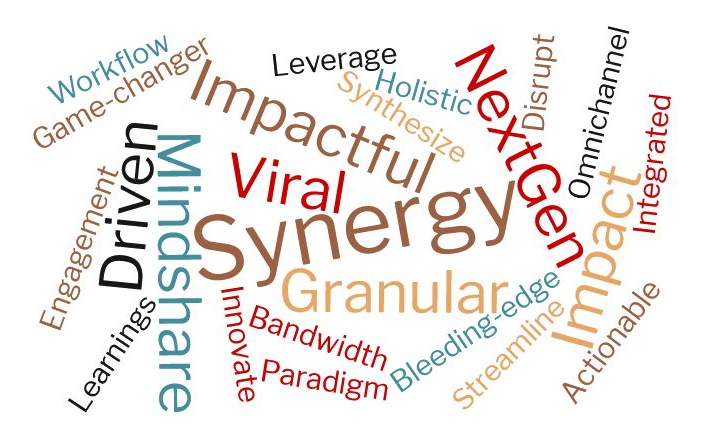 1. Thinking Outside the Blue-Sky Box

We’ve combined a couple of terms here, but “thinking outside the box” and “blue-sky thinking” are both so overused that we need to put them to rest. After all, they’re meant to be demands for innovative thinking, so at least use some imagination when you ask for it!

To “shoot the puppy” is to do something desperate or unpleasant (similar to “bite the bullet”). And while we agree that shooting a puppy is “unpleasant,” we really don’t want to picture canine violence when we’re already in a stressful situation!

Sure, you don’t want to go into detail about your bodily functions in the office. But what was wrong with “going to the bathroom”? When people say they’re taking a “bio break,” it sounds like they’re going on an environmentally friendly vacation. And it must stop here.

Does anyone really know what “synergy” means anymore? It used to have quite a specific meaning: the increased value and performance produced when two companies work together. Nowadays, though, we’re pretty sure people are using it just because it sounds fancier than “cooperation.”

When we first heard someone offer to “open the kimono,” we immediately left the office for fear of what was to come. But even if we had known that it means “share information,” we’d still have made a quick exit, as weird buzzwords scare us almost as much as threats of public nudity.

Look at any resume and you’ll see people boasting about being “driven” or “motivated.” But shouldn’t these be the default? Whatever your job, you should want to do your best! So adding “motivated” to your resume is a bit like specifying that you’ll be “awake” or “breathing” at work.

Technically, “mindshare” refers to how much buzz there is around a product or service in the public consciousness. To us, though, “mindshare” sounds more like the name of a futuristic social network that has been implanted directly into our brains to force us to worship Mark Zuckerberg. Scary stuff.

Have we missed an awful buzzword? Or do you want to defend some of the jargon above? Leave us a comment or get in touch to let us know!